← back to
Seeing Red Records
Get fresh music recommendations delivered to your inbox every Friday.

Songs To Crush Beers To Vol I: Slippery When Blacked 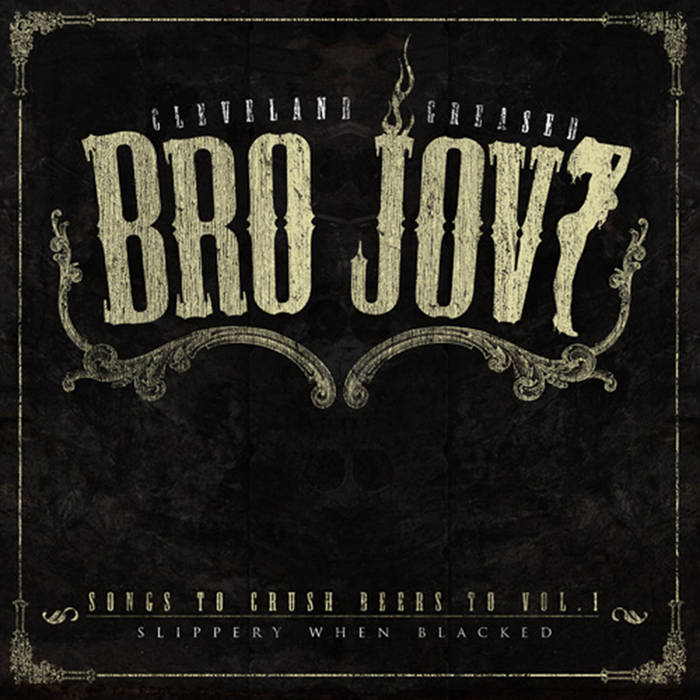 What happens when Extreme Metallers go STONER? To be more accurate, what happens when former and present members of Abigail Williams, Aborted, and System Divide go all out on a drinking' binge?

The result is the alcohol fuelled stoner rock - BRO JOVI! Strap up, crack open a beer and enjoy this soundtrack to binge drinkin', bar room brawls, and hangovers. The band are known for describing their sound as: "It's music that'll make you wanna fuck or fight!".

BRO JOVI originally self - released their debut album way back in November of 2010, and are finally BACK!! The band are in the beginning stages of writing and recording a brand new album looking to see the light of day in 2020! As a means of celebrating this annoucement, their first album, Songs to Crush Beers To Vol I : Slippery When Blacked, is available for FREE!

“These guys are writing music that is fun and engaging, guaranteed to fuel your next kegger. There is a certain manic dedication to the music that makes Bro Jovi's debut Songs to Crush Beers To Vol. 1 strangely addictive. The crunchy vocals and the epic guitar tone immediately reach out and fill me up with the urge to party. Bro Jovi understand how to get ripped in the least classy, most violent and destructive way possible. In other words, Bro Jovi may very well be this generations Municipal Waste, only now groovier and more Motorhead inspired. If they aren't, we stil have an awesome new band, who prove the cult of partying will never die.”
- Two Guys Metal Reviews
www.twoguysmetalreviews.com/2014/07/bro-jovi.html?m=1

"Expect upbeat riffs, yelling, downtuned guitars, heavy baselines and a healthy dose of cowbell for good measure. This album could quite easily be the soundtrack to that little dive bar that you have fond memories of even though it was run down and filthy, and the beer was crap but only once you managed to find the bar through the haze of smoke. If that doesn’t give you a clear idea of what to expect, let’s look at some of the tracks.

‘Sanctuary Of The Beast’ is a great chuggy number with lashings of cowbell that is bound to get the room bouncing. The riff is nice and simple, but incredibly catchy and pairs up well with the powerful yells of vocalist Rob Montague. This certainly gets the album off to a good start after the extended intro ‘Greased.’"
- UberRock
uber-rock.co.uk/bro-jovi-songs-to-crush-beers-to-vol-i-slippery-when-blacked-seeing-red-records/

“Truth be told, there hasn’t been many new stoner releases that can retain my attention as much as Bro Jovi‘s Songs to Crush Beers to, and with releases as such, one now knows where to go for their fix of stoner metal.”
- Heavy Metal Tribune
www.heavymetaltribune.com/album-review-bro-jovi-songs-to-crush-beers-to-vol-1/

If you like Songs To Crush Beers To Vol I: Slippery When Blacked, you may also like:

Bandcamp Daily  your guide to the world of Bandcamp

Damu The Fudgemunk shares his recent collab with Def Pressé, plus jams from Common and more